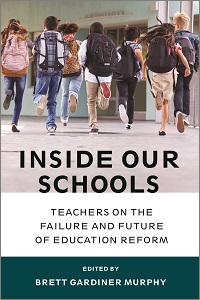 This past summer, I got an email inviting me to write about what it’s like to work in a school that doesn’t really believe in standardized tests… but still has to administer them.

Unbeknownst to Brett Murphy, the esteemed editor of Inside Our Schools, I am one of the testing coordinators at SLA, so I had a lot to say on this topic. The title of the chapter became a summation of our options — and by “our” I mean all of us: Accept, Reject, Dismantle.

If that sounds heavy, don’t worry. The chapter also gave me the chance to share a delightful tradition we have for the role of testing coordinator at SLA. It was established many years ago by Mr. Zac Chase:

“From here on out, I am not going to be Zac when I am doing this work,” he announced at the start of one of our proctor training sessions, somewhere back in the Spring of 2009. “I don’t want to be myself while I’m doing this job. Whenever you need to talk to me about testing, you need to talk to Rick.” Rick was randomly selected, but subsequent testing coordinators leaned towards adopting celebrity names or fictional personas: Nurse Ratched, Marky Mark, Beach Dave.

After a brief brainstorming session, we hit on an obvious choice: Boris and Natasha. We would play the villains, but they would be the loveable, cartoonish kind. The fact that one of us is Russian leant a vague air of legitimacy to the choice. The staff responded positively to the appearance of our cartoon personas in the training slide shows. But more than anything, the names were valuable because they gave us open license to be grumps. Teachers stopped asking me about testing matters without any warning. They developed the delightful habit of saying, “I have a question for Natasha”—to which I could reply, “sorry, she’s not available right now.” Conversely, on a testing day, they would warn the (mildly confused) students: “Don’t bother her. She’s not Pahomov today.”

I am beyond excited to get my hands on the final product, not in the least because the other chapters are written by Michelle Gunderson and a host of other excellent educators, some of whom I will be meeting for the first time through their writing.

If you are at all curious as to what life is really like in schools, order your copy today. You can get 20% off your order directly from Harvard Press with the code IOSS17.