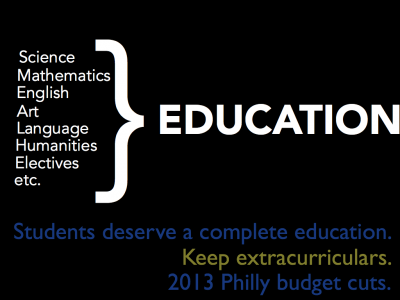 A number of our students have chosen to get early dismissal from their families and attend a rally organized by the Philadelphia Student Union.

As a result, a number of us were also left in school — which made Keystone Exam prep not the wisest option for the day.

So, what did we do instead?

We crafted our own responses to the projected school district budget shortfall.

Richard wrote a letter describing his concerns about losing the Engineering program at SLA.

Reggie is seeking individual stories from students about the cuts, to compile into a document.

Allen is worried that basketball will be cut next year — and he also doesn’t think that his voice will be heard on this.

Lloyd described his love of computers, and how SLA has helped his skills grow.

Alaina created a digital poster and also wrote about her experience with Computer Science at SLA.

The ultimate message — you are free to decide how you need to respond to these budget cuts, but the most effective stories are the specific ones. It may be counterintuitive, but these details have the most universal reach.